It's time for the AbsoluteWrite Blog Chain.  This month our theme is Second Chances.  This post is about second chances in a couple ways.  First it is about near-death experiences (not mine, phew!) and also a second chance for this post.  I had written this before, and recently reread it.  I thought, "Ew, my writing has improved since then!"  So I rewrote it (cutting the word count in half!), and ta da, second chance for this story.  After the post you will find a list of my fellow bloggers, pay them a visit, you won't regret it!


Mothers and Fathers are different.  Call me naïve, but sometimes this still catches me by surprise. 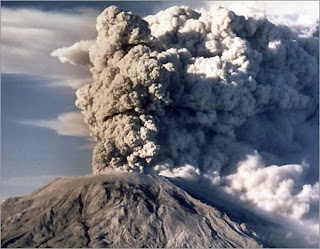 You may recall that in 1980, Mt. St. Helen’s erupted killing 57 people.  It was nearly 59.  The day before the eruption, my husband and his best friend hiked up the mountain and past the red zone, where they should not have been.  They considered camping over night, but decided not to because the following day was Sunday and they didn’t want to miss church.  Thirty years later, my sons went up Mt. St. Helens and nearly got themselves killed.  Perhaps it runs in the family.
The day my sons and their friends went up the mountain, I was nervous and called my husband.  “Do you think they’re ok?”
He assured me they were, after all, "what could happen?"  I was almost too astonished by this question to answer.  They could fall off the mountain, of course!  Mothers are really good at "worst case scenarios".   The group did return safely, but what a story they had to tel.
It seems that there was more snow on the mountain than they had anticipated and they were not adequately prepared. We're all heard this story before haven't we?  On the 10 o'clock news!  Nevertheless, they climbed to the top and were, as expected, very pleased with themselves. 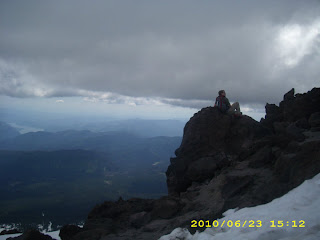 On the way down, one of the boys, Austin, got so cold he could barely walk.  Yikes hypothermia?!
As the boys spoke, I looked at my husband in disbelief and said, "What could happen?” He just gave me a sheepish grin.
They gave Austin a “group hug” to replace some of his body heat.   Then they continued.  They came to a slope and the boys decided rather than take the trail as their leader did, they wanted to descend the mountain a little more quickly. They chose to slide down.  My son, Caleb, decided  he would like to slide down on his stomach.
Did you think you were Frosty or something?" I asked.
"No more like a penguin."
Alrighty then. He got into position and started the slide.  Quickly he picked up more speed than he was comfortable with so he put his elbows down as brakes to slow the descent, but it didn't help.  Then he tried his feet again to no avail. He put his hands out in front of him, until the thought came to him that perhaps he could break a wrist if he hit a tree.  Your wrists?  What about your head, your ribs, your spine, your legs  His Frosty slide ended with a spectacular crash, but amazingly he walked away unharmed.
At this point of the narration, I gave my husband the you-see-what-could-happen-look, and again he smiled sheepishly.
Austin had gone down with Caleb and also crashed spectacularly.  The other boys, Jordon and my son, Ammon watched.  From the bottom Caleb and Austin tried to warn their friends that this had NOT been a good idea.  However the wind and distance converted their message from  "No, no, don't go,"  to "go, go, go".  So they did.
All the boys, except Caleb went down on their feet.  Like skiing, without the skis?  Is this just my mom imagination, or would you agree that this is infinitely more dangerous than regular skiing?  No skis + no poles = no control.
Jordon lost his balance and slid for distance his posterior.  From this "seated" position, he flew over a bump and found himself airborne.  Miraculously he landed on his feet.  He was the only one of the four that was able to stop without crashing.
Again I gave hubby The Look which was answered by The Sheepish Grin.
The rest of the descent was fairly uneventful, as hikes go apparently. Thank goodness!  Caleb and Austin both had raccoon sunburns on their faces. "Why didn't you use the sunscreen I sent with you?"  I felt compelled to distance myself from this insanity, but showing that I had tried to prepare them.
"I did use the sunscreen. I just forgot to put it on my face." Good grief! Son, you are never leaving the house again!
One last time, I gave my husband The Look and he just started laughing.  Do you know why he was laughing?  I bet the dads reading this do.  I'll explain it for everyone else.
He was laughing because none of this surprised him!!!  Yep, you read that right.  He didn't know the details, of course, but it did not surprise him that there was "an adventure".  He did all kinds of crazy things like this when he was younger.  And naturally, he assumes that because he did it and came through it fine, the boys will too.
And that, my friends, is the difference between mothers and fathers. 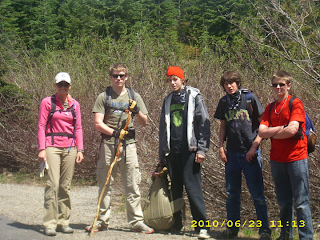 Sorry about the word verification, I hate it too, but spam has gotten bad lately.

Me and My Blog

I've moved! I would love for you to come visit me in my new location:
http://lesliegnelson.com
It's the same Leslie's Illusions, just in a new home. Hope to see you there.

Previous posts...in case you missed it